Tucktonia – ‘A SALUTE TO BRITAIN’ By Alex McKinstry (Part 5) 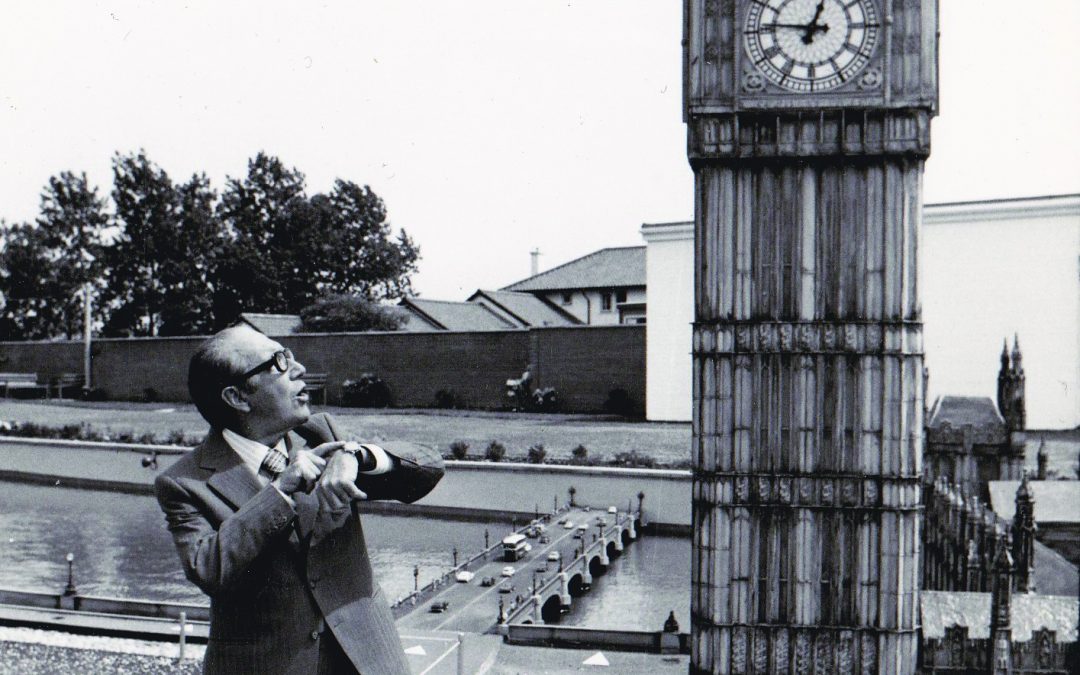 The grand opening of Tucktonia, the model village at the back of the Tuckton Golf and Leisure Park, took place on Bank Holiday Sunday, 23 May 1976, with Arthur Askey acting as master of ceremonies. ‘We’d tried to get Bernie Ecclestone,’ recalls Harry Stiller, the ex-Formula 3 champion who came up with the idea for Tucktonia – and who stayed on, as consultant in the project, after selling the site to Grand Metropolitan in 1975. ‘I’d known Bernie for years, and of course he’s tiny, so that would have fitted with the model landscape. But it wasn’t his sort of thing. Then Ken James, the site manager, said “Why don’t you ask Arthur Askey?” – and he agreed to do it for one hundred quid, plus his train fare.

The 200 or so models making up the site continued arriving till the last minute, some requiring urgent repairs after suffering damage in transit. As the landscape took shape, a security firm was enlisted to provide 24-hour surveillance: Sentinel Security, consisting of a father-and-son team, Ken and Tony Janes, and their German shepherd, Gretchen. Sue Good, who worked at the leisure park from 1974, remembers patrolling the site with them the night before the grand opening – ‘leash in one hand, torch in the other, ready to ambush any intruders waiting to blow up the Houses of Parliament!’

Just as the object of Tucktonia was to replicate ‘the best of Britain in miniature’, the opening ceremony was dubbed ‘a salute to Britain’ and took the form of a carnival through Christchurch, celebrating the more colourful aspects of Britain’s heritage. It took off from the Bridge Street car park at 2 p.m., headed by the seventy-five-year-old Askey – clearly having the time of his life aboard a 1909 open-topped Rolls-Royce Silver Ghost, on loan from the National Motor Museum at Beaulieu. Accompanying him were ten-year-old ‘Tucktonia princess’ Sarah Ridout; the Mayor of Christchurch, John Morgan; and, bringing up the rear, brass bands, Scots pipers, majorettes, Beefeaters, commercial floats and other vintage vehicles. Amid crowds three deep, the procession trooped along Christchurch High Street, Sopers Lane, Willow Drive (not long opened) and into Stour Road, where, at 2.30 p.m., Askey raised the Tucktonia flag – a chirpy robin, with a Union Jack breast – and declared the model landscape open. Crowds then flooded in to view the new attraction while Askey signed autographs, having already posed for photographs with the exhibits, some of which are reproduced here.

There were teething troubles that day. The miniature trains showed an unfortunate tendency to crash into each other. The bascules of Tower Bridge got stuck in the ‘open’ position, while the cars on the Tucktonia motorway only moved in fits and starts. More portentously, as The Christchurch Herald reported on 29 May, residents in the flats overlooking the complex ‘were unhappy about the noise from all the merrymaking’. We shall look at these local objections further down the line, but in our article we will focus on the employees who smoothed over these initial difficulties, and helped make Tucktonia such a success.