This month I’m pursuing H.V. (Henry Vollam) Morton (1892-1979), a pioneering travel writer, hailing from Lancashire, who visited Christchurch when researching his ‘In Search of England’ (1927).

Morton, like Mary Shelley, had parents who were both writers, reported on the discovery of Tutankhamun’s tomb (when a journalist), served in WW1, and during WW2 was present at the ‘Atlantic Charter’ meeting with Churchill and Roosevelt. He liked astronomy and had a Siamese cat (as you do).

So, what did he make of Christchurch? Having sampled Bournemouth’s delights, Morton headed through Checkpoint Charlie into the Priory town. He found Church Street, ‘a narrow street full of tea-shops’, and one that was a ‘feminine endeavour’, as ladies appeared on the pavement to try and entice him inside (with offers of tea and buns you understand). Although it was only 4:30pm so indubitably teatime, he was offered lobster. I didn’t get where I am today partaking of lobster at 4:30.

Morton considered the offer almost ‘indecent’ at such a time, felt grossly embarrassed, so naturally said ‘yes’ (it’s a British thing). He was then served China tea, which apparently ‘goes’ with lobster. Does it indeed?! The author then slid into a happy repose where he felt unable to refuse anything he was offered, so ended up surrounded by a growing mountain of buns, rolls, jam ‘n cream and cakes. Morton ruefully reflected that the only thing missing was the Mad Hatter himself from this veritable tea party.

Morton would later retrace his steps along Church Street where a grey-eyed maiden accosted him and offered him another lobster. He fixed his gaze determinedly ahead towards the High Street and quickened his pace. Church Street hasn’t really changed that much since Morton’s 1920s visit. Ok, businesses may have come and gone, but the essence of the place is much the same. I’m not sure you’ll be offered a lobster at 4:30 though. 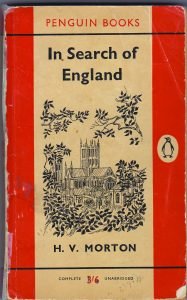